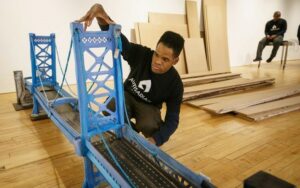 Kambel Smith, who has autism, is shown making final adjustments to his sculpture of the Benjamin Franklin Bridge prior to his art show at the Fleisher/Ollman Gallery in Philadelphia. (Jessica Griffin/The Philadelphia Inquirer/TNS)

PHILADELPHIA — For years, Lonnie Smith would gather the artwork made by his son, Kambel, and set up small shows at senior centers, libraries and YMCAs across the Philadelphia region.

Lonnie knew his son had a gift, but he couldn’t get anybody else to see it. “No one would come,” he said. “Zero.” It crushed Kambel every time. And so, it crushed Lonnie, too.

To soften the blow, Lonnie would sit with his sons, Kambel, now 32, and Kantai, 24, both of whom have autism. Together, they would create stories about how people with autism — whom they called Autisarians — have superhuman abilities, not disabilities.

Lonnie would tell his sons that sometimes, it’s just hard for non-Autisarians to see that.

But this year, they finally did.

Since January, when Kambel Smith’s intricate, large-scale building sculptures were first exhibited at the Outsider Art Fair in New York City — earning the attention of art critics from the New York Times and New York magazine — his work has been showcased everywhere from the Marlborough gallery in London to the Atlanta Contemporary Art Center in Georgia.

Several of Kambel’s pieces, which he builds freehand, have also been purchased by the American Folk Art Museum, the West Collection and private collectors, who have paid up to $25,000 for his work.

A collector in Dallas bought Kambel’s sculpture of Lincoln Financial Field, which The Philadelphia Inquirer featured in May, for an undisclosed amount.

This month, for the first time since his meteoric rise, Kambel Smith will exhibit his work locally, at the Fleisher/Ollman Gallery in Center City.

Alex Baker, director of the gallery, said he was “blown away” when he first saw Kambel’s work at the Outsider Art Fair this year.

“Here’s a guy from Philadelphia — and I consider myself turned on to the local art scene — and I’d never heard of him before,” Baker said.

If not for a chance encounter with a neighbor who saw Kambel building sculptures on his front yard in Germantown, no one may have ever seen his work.

That neighbor, Barbara Gettes, shared photos of Kambel’s pieces on Facebook and helped connect him with curator Chris Byrne, who is based in Dallas and New York.

It was Byrne who presented Kambel’s work at the Outsider Art Fair and has helped him navigate the art world. Kambel is now represented by the Marlborough, where he has a New York exhibition running concurrently with the show at Fleisher/Ollman, both of which Byrne helped organize.

“He’s had his first one-person show at a museum, he’s now in public and private collections, and he has two tandem one-person shows,” Byrne said. “The amount of interest from museums and public collections has been remarkable.”

The Fleisher/Ollman show will feature four of Kambel’s Philadelphia building sculptures: The Philadelphia Museum of Art; the Ben Franklin Bridge; Independence Hall; and the Pennsylvania Academy of the Fine Arts.

Given the immense size of the works — the Art Museum sculpture alone is 16 feet wide and 10 feet deep — the gallery could only accommodate four pieces.

“They are quite monolithic,” Baker said. “He is not afraid of scale.”

Several of the pieces incorporate Kambel’s love of painting, too, like the small portraits of the Founding Fathers hidden inside of his Independence Hall sculpture. Kambel started as a painter, but when his father ran out of money for canvases, Kambel began building sculptures out of cardboard he found in the trash.

“He’s not an architect, that’s the beauty of these models,” Baker said. “I love his attention to detail, but at the same time it’s not just an exact replica of the building. There’s a lot of humanity in these sculptures.”

That’s because there’s a lot of humanity in Kambel, too. Despite the newfound attention his work has received this year, he hasn’t changed much.

“I think that as far as he goes, he’s still humble… . He just wants the simple things he’s always wanted,” Lonnie Smith said of his son.

One of those things is to help other Autisarians, many of whom have reached out to Kambel this year. With that in mind, the Smith family has created the Autisarian, a nonprofit where they hope to work with other “autistic superheroes” to find their gifts, Lonnie Smith said.